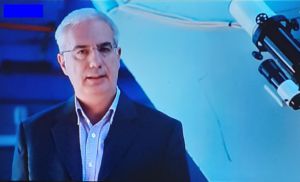 Observational Extragalactic Astrophysics, with emphasis in Space Infrared Astronomy. He has been working mostly on problems related to Transfer of Radiation within galaxies, studies of the properties of dust in nearby galaxies as well as the studies of the interstellar medium in (Ultra) Luminous Infrared Galaxies (ULIRGs). He is Telescope Operations Manager of the 2.3m ‘Aristarchos’ telescope as well as 1.2m Kryoneri telescope.