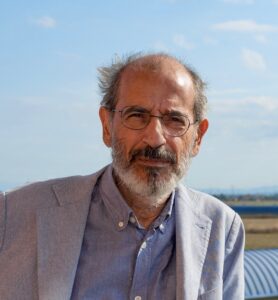 Professor exceptional class at University Paris Diderot, is the director of the European Gravitational Observatory, hosting the Gravitational Wave antenna Virgo in Pisa/Italy (EGO, 2018-2023); chairman of the International Scientific Commitee of the Polish Excellence Centre ASTROCENT (2018-) among the principal investigators of the Institute of Physics and Mathematics of the Universe (KAVLI-IPMU, 2007-2022) in Tokyo. He has worked on particle and astroparticle physics at CERN, Fermilab, Gran Sasso/Italy and Greece and he has taught Physics in Athens, Lyon and Paris-Diderot Universities, as well as the Ecole Normale’s of Lyon and Paris. He has been director of the Laboratory of Astroparticle Physics and Cosmology (APC, 2014-2017); deputy director of the National Institute of Nuclear and Particle Physics of CNRS responsible for Astroparticle Physics and Cosmology (IN2P3/CNRS, 2002-2012); coordinator of the EU-funded Network of agencies funding Astroparticle Physics (ASPERA, 2006-2012), first chairman of the European Consortium of Astroparticle Physics (APPEC, 2012-2015). He has also been coordinator of the cluster of Sciences and Engineering of the Community of Universities Sorbonne-Paris-Cité (2016-2018); co-director of the Laboratory of Excellence UnivEarths (2014-2018) at the interface of Geosciences and Astroparticle Physics; director of the CNRS interdisciplinary program “Particules et Univers” (2002-2011); president of the administration council of the European Gravitation Observatory (EGO, 2003-2012); chairman of the resource board of the AUGER High Energy Cosmic Ray Observatory (2011-2014) in Argentina and chairman of the Scientific council of Instituto di Fisica de Altes Energias (IFAE) in Barcelona (2009-2013). He has over 400 publications in particle physics, astrophysics and astroparticle physics and he has also coordinated the group on Art and Science Univers 2.0 (2017-2020) he is a member of the “orientation council” of the Foundation Daniel and Nina Carasso on the theme of art and science, also since 2017, and since many years he has organized or participated to events and exhibitions on art and science and has written several essays on the subject, published in books or exhibition catalogues (e.g. “The Rhythm of Space” , exhibition curated by him , in Pisa 2020).